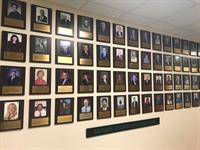 BANGOR, MAINE – September 21, 2021 – On Friday, September 24, 2021, Husson University will recognize six prominent individuals as part of the University’s prestigious Alumni Hall of Fame awards ceremony. The presentations will take place at 5 p.m. in the Gracie Theatre on the University’s Bangor, Maine campus. The event will be followed by a reception in the adjacent Darling Atrium. All event attendees will be required to wear masks indoors during the event and reception in accordance with Husson University healthcare protocols. Unvaccinated attendees are also being asked to wear their masks outdoors while they are on campus.

Husson University President Robert A. Clark, PhD, CFA, said, “All of these special individuals are exemplary professionals who have made distinguished contributions to their professions, their communities and the University. They are a testament to the Husson experience and the ways the University helps mold individuals into positive members of society who personify character and humility. Their devotion to the greater good makes them worthy of recognition.”

Individuals to be honored this year include:

Young Alumna Kasey Mehuren-Kimmel ’09 - Kasey Mehuren-Kimmel attended the New England School of Communications and earned a Bachelor of Science in video production in 2009. As a student. Mehuren-Kimmel earned a reputation as a tenacious individual with clear goals and aspirations. Her personal mission was to intern and eventually work at the headquarters of ESPN (Entertainment and Sports Programming Network), the world’s leading multinational, multimedia sports entertainment organization.

Working diligently night and day to become a leader in her class, Mehuren-Kimmel eventually landed the coveted ESPN internship. She made such an impression on the ESPN management team; they invited some Husson faculty and staff to their Bristol, Connecticut headquarters for a day of strategic planning. The meeting led to the creation of an educational and experiential learning pathway for future Husson interns.

Within a week of graduating, Mehuren-Kimmel accepted a full-time position at ESPN. Since then, Mehuren-Kimmel has become a leader within her field. After years of devoted service to the organization, she is now ESPN’s associate studio director. Her never-give-up attitude, loyalty to the craft and commitment to excellence will continue to be the cornerstone of her success. She and her husband, Eric, who also works at ESPN, reside in Connecticut with their twin boys. She remains close to Husson faculty, especially Rodney Verrill.

Alumni Hall of Fame Inductee – Tim Cabral ’90 - Timothy Cabral earned his degree in radio broadcasting from Husson University’s New England School of Communications in 1990. Following graduation, he worked for Carnival Cruise Line® for 22 years. In 2012, he started his own company, Cruise Production, Inc. As the owner and production manager for this successful Florida-based organization, Cabral partners with Husson to give NESCom students the opportunity to work on a cruise ship for a week during winter breaks. He actively employs over a dozen alumni in their contracted employee group. He and his wife, Shelley, reside in Pembroke Pines, Florida with their children, Ethan and Erin.

Alumni Hall of Fame Inductee – Allen L’Italien ’88 - George Allen L'Italien is a product of the Acadian culture of Northern Maine. Starting in the eighth grade, L’Italien worked summers and after school at what was once Northern Maine General Hospital. It was here that he first developed a passion for delivering healthcare.

After a three-year stint working at a major hospital in Connecticut, he returned to Maine and worked for two years at MDI Hospital. In 1981, he left MDI Hospital to join Eastern Maine Medical Center as a nurse's aide in the inpatient oncology unit.

In an effort to improve himself and better serve cancer patients, L’Italien went on to earn a Bachelor of Science in nursing from Husson in 1988. Shortly thereafter, he passed his nursing boards to become a registered nurse at Northern Light/Eastern Maine Medical Center. During his career at the Bangor hospital, Allen held the positions of charge nurse, oncology nurse educator and department head for inpatient oncology services before becoming the business manager for outpatient cancer care services. He retired in 2021 after serving as the executive director of Northern Light/Eastern Maine Medical Center Cancer Care. In this role, he was responsible for patient care services and guided the development of the Lafayette Family Cancer Institute. L’Italien is a founding and ongoing board member for the Maine Cancer Consortium, as well as a past member of the New England Clinical Oncology Society and of the Association of Cancer Executives.

Presidential Outstanding Service Award - Dan Hutchins ’83 - Dan Hutchins was born in Portland, Maine and attended Cheverus High School. He graduated from Husson with a Bachelor of Science in accounting in 1983 and was a member of the Tau Kappa Epsilon fraternity. After graduation, he joined the international accounting firm Coopers and Lybrand, an organization that’s now known as PricewaterhouseCoopers. Over the course of thirty years, Hutchins rose to the rank of partner and held leadership positions including managing partner of the Portland Maine office and the Northeast leader of the organization’s private company services. He worked with such notable clients as Dragon Products, Hussey Seating, Delorme Publishing, L.L.Bean, Central Maine Power, Maine Public Service, the University of Maine System and The Jackson Laboratory.

Hutchins’ service to Maine community organizations has been extensive. He served as the chair of the 2003 Greater Portland United Way annual campaign. This campaign raised the second highest amount in the organization’s history. He also served as the vice chair of the Boy Scouts of America, Pine Tree Council and the Maine State Chamber of Commerce. He also served on the board of Susan L. Curtis Foundation for children with cystic fibrosis.

Since graduation, Hutchins has remained committed to the continued success of his alma mater. He first joined the Husson Board of Visitors in 2011 and actively participated in getting the Lin Bell Golf Tournament more traction in Southern Maine. The proceeds of this golf tournament help make a Husson scholarship possible.

He also helped to establish a more robust Southern Maine alumni network. Always willing to help in any way he can, Hutchins transitioned to the Husson Board of Trustees in 2014 and began serving on the Southern Maine Alumni Board shortly thereafter. He and his wife, Sherry, have two sons, Danny and Matt. The couple splits their time between Naples, Florida, and Falmouth, Maine.

In 2010, Martz joined Husson University as the vice president for advancement. With more than 30 years of experience, he helped launch the largest comprehensive campaign in the University’s history.

During his travels, Martz met the love of his life, Mary. She grew up in Missouri and developed a passion for art and seeing the world. Mary lived a life filled with the most important things: family, friends, art and love. She and Martz shared a love of culture that took them around the globe. They always had a special affinity for Paris. Once in Maine, Mary used her appreciation for the arts to help catalog Husson University’s art collection. Together, they established the Tom and Mary Martz Scholarship, which helps students pay for the expenses associated with international study. After Martz’s retirement in 2016, the couple moved to New Hampshire to be closer to family. Although Mary is no longer with us, her light continues to shine.

For more than 120 years, Husson University has shown its adaptability and strength in delivering educational programs that prepare future leaders to handle the challenges of tomorrow through innovative undergraduate and graduate degrees. With a commitment to delivering affordable classroom, online and experiential learning opportunities, Husson University has come to represent a superior value in higher education. The hallmarks of a Husson education include advanced knowledge delivered through quality educational programs in business; health and education; pharmacy studies; science and humanities; as well as communication. According to a recent analysis of tuition and fees by U.S. News & World Report, Husson University is one of the most affordable private colleges in New England. For more information about educational opportunities that can lead to personal and professional success, visit Husson.edu.