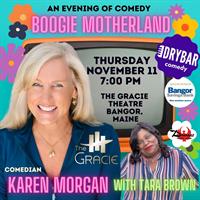 BANGOR, MAINE – November 5, 2021 – Popular Portland, Maine comedian Karen Morgan returns to Husson University’s Gracie Theatre on Thursday, November 11, 2021 at 7 p.m. along with Tara Brown, for a night of fun, family-friendly comedy. Morgan’s new show, “Boogie Motherland,” deals with such relatable topics as motherhood, marriage and life in Maine. The show is the third offering in the Gracie’s tenth season with lead sponsor Bangor Saving Bank. Downeast Toyota has also provided a supplemental show-specific sponsorship. All veterans can purchase tickets at half price for this Veteran’s Day performance.

“Karen’s a fantastic comedian, and we’re thrilled to host her new show,” said Jeri Misler, managing artistic director of the Gracie Theatre. “She’s been on our stage alongside Paul Reiser and Caroline Rhea. Audience members demanded that we bring her back!”

Morgan’s humor about motherhood and marriage will have married couples and parents rolling in the aisles. With over 14,000 viewers on YouTube’s “Dry Bar” comedy channel, her take on daily life is both relatable and hysterical. Stories about turning 50, raising teens, and married life will strike a familiar chord with audience members. This is the perfect entertainment for a “date night” or a “women’s night out.”

Karen Morgan was born and raised in Athens, Georgia but now calls Maine home. A former trial attorney, she began her professional comedy career as a finalist on Nickelodeon Television’s “Search for the Funniest Mom in America.” Since then, she’s performed in comedy clubs and theaters from New York to Hollywood.

Morgan’s latest CD, "Mean Candy," can be heard on Sirius XM Radio. Home viewers can also enjoy her comedy special on Dry Bar Comedy. Her TV appearances include comedy shows and ads for companies like Walmart and Zyrtec. Morgan’s family friendly shows in performing arts centers around the country have made her a favorite among theater audiences.

Still licensed to practice law in Maine and Georgia, Karen’s humor has brought laughter to corporate events and charitable fundraisers. She lives in Cumberland, Maine and misses Waffle House very much.

Opening for Morgan will be Tara Brown. Brown is a nationally touring headline comedian who has shared the stage with Ilana Glazer, Cristela Alonzo, Ryan Hamilton, Jimmie “JJ” Walker, and the late John Witherspoon. She has been featured on The Clean Comedy Podcast, The Comedy Zone podcast, “Midlife Margaritas,” and Jeanne Robertson’s “Back Porch Saturdays” show. CharlotteFive.com named her as one of “The Standup Comedians You Need to Know in Charlotte;” while Queen City Nerve named her as “Best Comedian” for 2019 in their “Best of the Nest Readers’ Picks.” In addition, Brown is the most recent winner of the “Jeanne Robertson’s Comedy with Class Humor Competition.”

Brown was a winner of the “Fight Night” and “Comedy Battle” competitions at The Comedy Zone in Charlotte; and was a two-time finalist for “Comedian of the Year” by the Queen City Awards.  She was also a 2018 and 2019 CrowdPlay Events Resident, and a 2019 resident at the Broadway Comedy Club in New York City.

Boogie Motherland will be at the Gracie Theatre on Thursday, November at 7 p.m. Ticket prices range from $16 to $17.50. Veterans can purchase tickets at half-price. Groups of eight or more can qualify for a discount by calling the box office. To purchase tickets call the Gracie Box Office at 207-941-7888 or visit https://www.gracietheatre.com. The Gracie Theatre is located at One College Circle in Bangor, Maine.

The Gracie’s season is made possible with support from Bangor Savings Bank. The theatre also gratefully acknowledges the generous support provided throughout the season by additional show sponsors including Downeast Toyota, Governor’s Restaurant and Bakery, the Mimi Foundation and Pepsi.

Completed in October of 2009, The Gracie is Husson University's center for the fine and performing arts. This beautiful 500-seat theatre is considered one of Maine’s premier performance venues. In addition, The Gracie also serves as a learning platform for students from the New England School of Communications in digital audio, sound mixing, set design and construction, lighting, acting and electronics.

For more than 120 years, Husson University has shown its adaptability and strength in delivering educational programs that prepare future leaders to handle the challenges of tomorrow through innovative undergraduate and graduate degrees. With a commitment to delivering affordable classroom, online and experiential learning opportunities, Husson University has come to represent a superior value in higher education. The hallmarks of a Husson education include advanced knowledge delivered through quality educational programs in business; health and education; pharmacy studies; science and humanities; as well as communication. According to an analysis of tuition and fees by U.S. News & World Report, Husson University is one of the most affordable private colleges in New England. For more information about educational opportunities that can lead to personal and professional success, visit Husson.edu.